On Tuesday morning the pastors of Lutheran Saints in Ministry gather in Fairborn Ohio to discuss the texts for Sunday.
These are the contributions that are brought to the table.

It will not go away

There was a CBC short documentary, more of a 5 minute news blurb, back in 2014 on “A Musical History of Death: Exit Music.” It dealt with a little known Gregorian chant known as “Dies Irae.” The chant was meant for the mass of the dead.
Why do a documentary on this? Well, for some reason, the melody has been quoted almost countless times in modern history. The sequence is:

Mozart quotes it in “Requiem.” Rachmaninov wrote piano concertos around it. It appears in “It’s a Wonderful life,” in the final dramatic scene where James Steward runs to the bridge and screams for the angel, Clarence, to give him his life back. It is in “the Lion King” when Scarr orders Simba killed. It shows up in “The Lord of the Rings,” when Bilbo drops the ring, “Close Encounters of the Third Kind,” at the Devil’s tower scene, in “Star Wars,” when Luke, having found his aunt and uncle dead, makes the decision to follow Obi on Kanobi, and  it is embedded in Michael Oldfield’s theme music of “The Exorcist.”
Who wrote it? Gregory reports that words and music came to him in a vision of a dove. Yes, Gregory suggests that God composed the theme, the theme of death and judgement.
For our texts, Daniel 12 and Mark 13, I suggest that verse 6. is appropriate, though others join the theme easily as well:

When the Judge his seat attaineth,
And each hidden deed arraigneth,
Nothing unavenged remaineth.

In both chapters, God has unfinished business with the world and announces that, indeed as prayed for by the saints under the altar (Rev 6:9-10), we shall see the spaghetti hit the fan in a meta-cosmic sense.
In Daniel, it is Babylon that will see God fight on the side of Judah which it has exiled. Michael the angel will come and battle on the side of the people. Michael shows up again in Revelation when he does cosmic battle with Satan. In both places, the dead shall be raised and judged. That is precisely the content of Dies Irae: Judgement will come to all. What shall I, mortal sinner, plead before the judge?
In Mark there is more tribulation as well and there shall be judgement. What shall be the judgement here? What shall plead for the temple that is ever so beautiful as the disciples note? It will not be the widow’s two copper coins, I tell you that for nothing, and if the fig tree is an indication, it will not be bushels of good fruit either.
As in Daniel and in Revelation, the angels will do harvest and God’s elect will be gathered from all corners of the world. If Revelation and Daniel are to be heeded, “Books” will be opened and everyone’s deeds will be exposed. It would seem then, that no one will be able to comfortably and conveniently hide in their grave for all eternity from the consequence of their actions and neither will being a heap of rubble be an excuse for church or temple to have failed in mission. (Kierkegaard)
There is a severity in Mark 13, Daniel 12 and much of Revelation that seems to have made it into the spirituality of the church that could write and sing Dies Irae, but it seems to have gone missing in our time.
I grew up with a cathedral in my town of origin that had this statue over the front door: 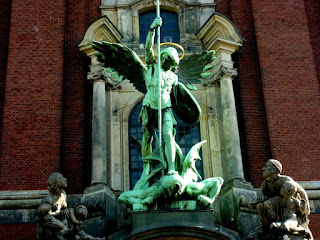 Yes, you see that right: St. Michael is a robust knight in armor, he is standing on the devils back, one foot on his head, and he is about to run his lance, which is shaped like a cross, into the back of the devil’s head. Reluctant humans view the scene. Both Michael and Satan seem to look at the same woman to their right who is holding two frightened children in her arms. This is her point of view: 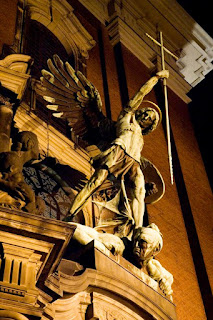 Someone, please, call the Hummel Figurine Company and Hallmark. They have gotten this angel thing all wrong! But then, maybe the rest of the world has gotten the whole death, resurrection, and judgment thing wrong as well.
In our time, we read stories written by 5 year olds about their trip to heaven where they saw grandma. Never mind that when Isaiah gazed into heaven and saw the angels he pooped his pants in fear. (Is 6:1-8) A good apocalypse, a good eschatological apocalypse, ought to do exactly that. Woe to anyone or anything that falls into the hands of the zealous God. Dies Irae understands this.
As I said: God composed the theme, the theme of death and judgement. I contemplate the gaze of Michael and Satan over entrance of St. Michael Cathedral. Is this woman the church? Are both of the angels, triumphant and fallen, saying: “Whose side are you on?”
There is nothing like a good apocalypse, the Isaiah kind, to clear the mind and focus on how we have been living. Mark 13 certainly works that way. Even the beautiful things built in faith have the blood of orphans and fallen houses of widows built into their walls. (Mk 12:40) What really is splendor? And if even the sanctuary of the almighty is passing and if even the house of prayer will be judged, will you escape?
Again, Dies Irae:

7 What shall I, frail man, be pleading?
Who for me be interceding,
When the just are mercy needing?

10 Faint and weary, Thou hast sought me,
On the Cross of suffering bought me.
Shall such grace be vainly brought me?

13 Through the sinful woman shriven,
Through the dying thief forgiven,
Thou to me a hope hast given.

18 Ah! that day of tears and mourning,
From the dust of earth returning
Man for judgement must prepare him,
Spare, O God, in mercy spare him.

CBC and various other news outlets, secular ones, have noted that this strange 1,500 year old Gregorian Chant will just not go away. It is, best I can tell, one of the best selling pieces of Gregorian Chant on iTunes. Go figure.
And neither will the sense of dread in depth of the human soul, expressed by Dies Irae, go away and maybe it should not go away either. Which angel’s side have we lived our life on? With the knowledge of good and evil came responsibility to use the ill gotten gift of the forbidden fruit. (Gen 3) “I didn’t know” no longer works. You know which angel wins in the end and even the just are in need of mercy.
Death is a little cataclysmic apocalypse for all of us individually. Even if we are underground when the spaghetti hits the cosmic fan, for all of us there is death and then comes judgement. Death and apocalypse are solidly Lutheran things. They are both occasions at which there really is nothing left to do but to cry out: “Save me Lord Jesus Christ by your holy sacrifice.”

9 Think, kind Jesu! – my salvation
Caused Thy wondrous Incarnation;
Leave me not to reprobation.

Amen! Come Lord Jesus.
Posted by Bartimaeus at 5:29 AM

What's in a Nme

There is an "inn" at a road that leads from Jericho to Jerusalem. It is a place to which the Lord carries near dead victims of the road to care for them. It is a place where the wounded traveler takes refuge, where the wounded soul sojourns a while before braving the road again. That road also goes by the name "Life" and we all are going up to the New Jerusalem. That "Inn" has a name: Church.